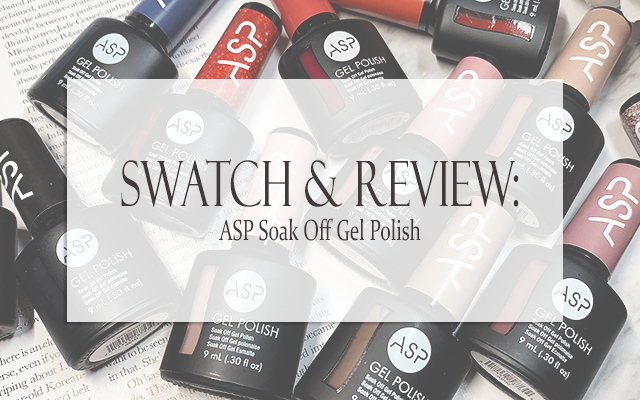 I have to admit that I sometimes forget just how much I love doing gel polish at home. It took me a long time to get a lamp and start doing it, but there really is nothing better for a quick, long wearing mani. Because I change the nail art on my left hand pretty frequently, I don't often do gel polish on that hand, but for my dominant hand and my toes I absolutely love a gel mani. The first brand of gel I ever tried at home is ASP Soak Off Gel* and they have always performed beautifully for me, so I was super excited to get the opportunity to swatch a bunch of shades from their line.
Keep reading for more! 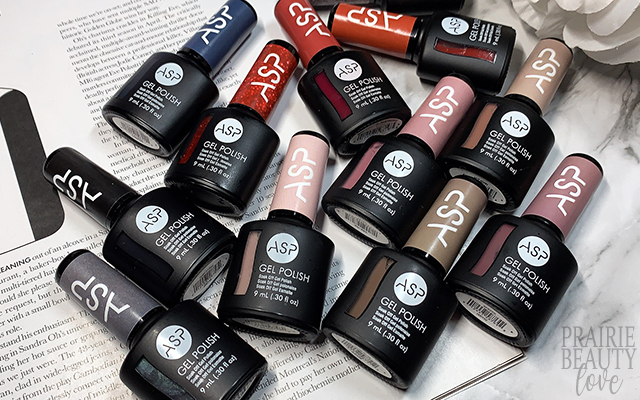 If you saw my review and swatches of the ASP Long Wear Nail Polish*, their traditional lacquer formula, you might notice some overlap here when it comes to the shades. I believe that all of the lacquer shades are available in their Soak Off Gel formula, but even though the shade names are the same and they're quite similar I did notice some differences in how they ended up showing up on the nails so I wouldn't automatically assume that the same shade will look exactly the same in both formulas.
Also, I know I'm going to be repeating myself a lot through each shade because this is a really consistent formula across the board. You have been warned - now let's get to the swatches in alphabetical order. 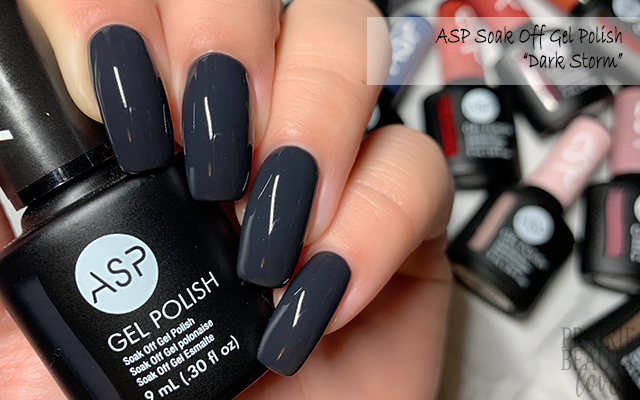 ASP Soak Off Gel Polish in Dark Storm*
I would describe this shade as a very deep smoky blue with the barest hint of teal. It's definitely has a lot of grey to it, but in this formula I would definitely say that it is distinctly blue. I absolutely love this shade, it's really smooth and easy to apply, levels absolutely perfectly, and is fully opaque in two coats. This is actually a shade I've worn as a full mani on my "other hand" and it's a stunner. 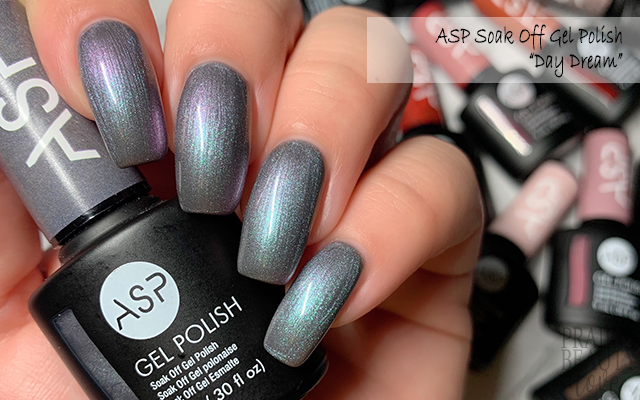 ASP Soak Off Gel Polish in Day Dream*
Day Dream is a really, really pretty green to purple duochrome shade with a lot of shimmer in it. I absolutely fell in love with this one in the lacquer formula, so I was a little bit disappointed that the gel version came out quite a bit lighter on my nails. It's still really, really pretty with a strong shift, but it's distinctly different. For me, this was a three coater and because it does maintain some brush strokes I feel like it's best to be really careful with the application of that third coat. Don't get me wrong, this is a really pretty shade, but I personally like the lacquer version better. 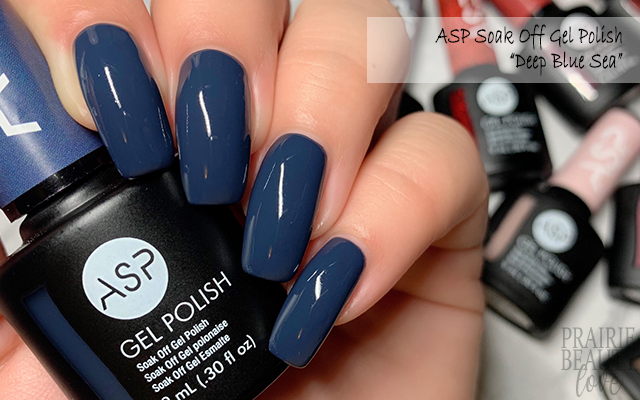 ASP Soak Off Gel Polish in Deep Blue Sea*
I would describe this shade as straight up classic denim - I think I could get wordy with it, but this is a denim blue if I've ever seen one. And it's actually a surprisingly unique shade in my rather large collection. This was another really easy, smooth application that leveled really, really well and gave me full coverage in two coats. It's definitely a beauty. 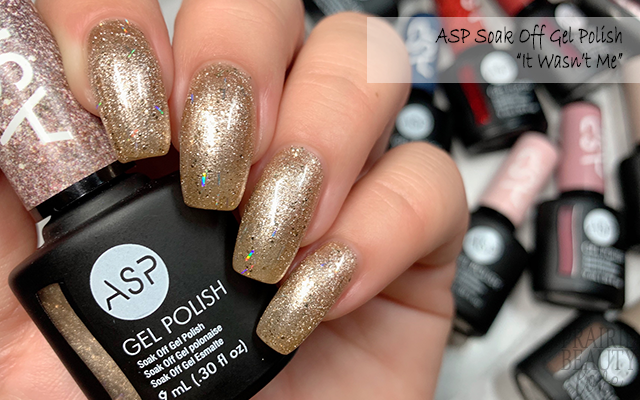 ASP Soak Off Gel Polish in It Wasn't Me*
Of all of the shades in this post, this one is by far the most unique. This is a full coverage shimmery gold shade that has gold glitters as well as holographic bar glitters in it. I'm personally not the biggest fan of bar glitters myself, but one the nails this is honestly just a stunner. It's got so much shine and texture and just absolutely screams holiday mani to me. It's a little bit more sheer so I would say you're probably going to want three coats for full opacity, but this swatch is actually two and I really like the look it gives even though there is some of that visible nail line. Either way, this is so pretty. 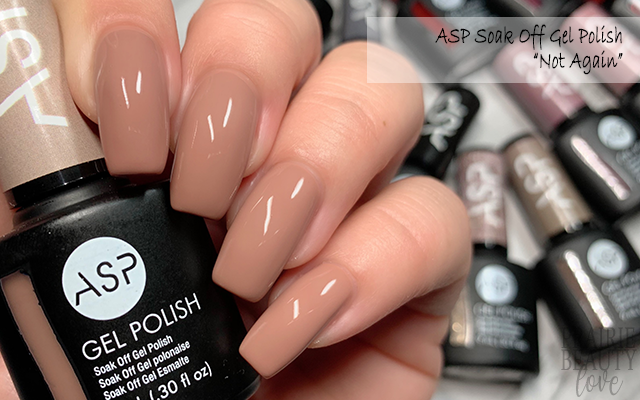 ASP Soak Off Gel Polish in Not Again*
One of my favorite shades in the lacquer collection, Not Again is also one of my favorite shades in the gel collection and one of the shades that really shows up quite the same regardless of formula. I described this in my other post as a sort of peachy camel and I really do stand by that. I also stand by the fact that I think that as nudes go, this is probably one of the more universally flattering type of shades. I think the depth and undertones would seriously flatter just about any skin tone. Also, it's beautiful to apply, self levels like a dream, and gives full coverage in two coats. Highly recommend! 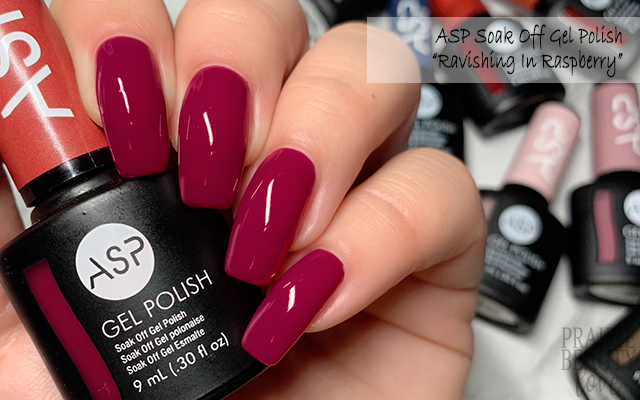 ASP Soak Off Gel Polish in Ravishing In Raspberry*
This is one of those shades that really walks the line between being a really cool toned red and a straight up pink, but it really is exactly what I think of when I think of a raspberry red shade - rich  and heavy in blue undertones. The formula on this one is absolute perfection, could not be more impressed with how easily and smoothly it applied and cured, giving me full coverage in two coats. 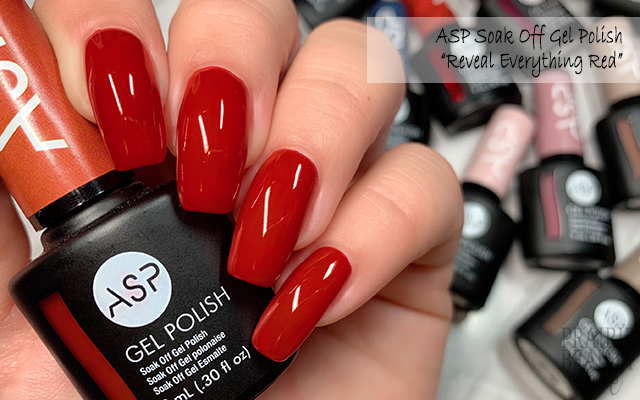 ASP Soak Off Gel Polish in Reveal Everything Red*
Next to Ravishing In Raspberry, this looks pretty warm, but in real life I would say that this is a super classic, bold red - like the colour of Louboutin soles. If you're in the market for a holiday red polish, I honestly think you can't go wrong with this one because I think on top of being very classic, it's also a shade that tends to be really universally flattering as well. And, like the rest of the créme shades in this collection - beautiful formula with easy application and two coat full coverage. Stunner. 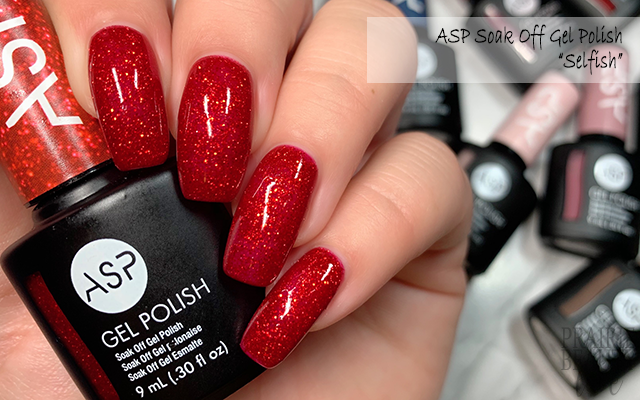 ASP Soak Off Gel Polish in Selfish*
This is actually one of the first gel polishes I ever bought and it's one that you would have seen pop up in my Christmas mani's last year - and it's one that you will see pop up this Chirstmas as well. If you're looking for a ruby slippers type of polish, this is it. Selfish has a red jelly base and is just packed full of red glitter. I actually find that on the first coat, the base is a little bit more of a berry red, but really turns into that classic primary red on the second coat. I think you really only need two coats of this polish for coverage and it has a beautiful finish and a ton of impact. 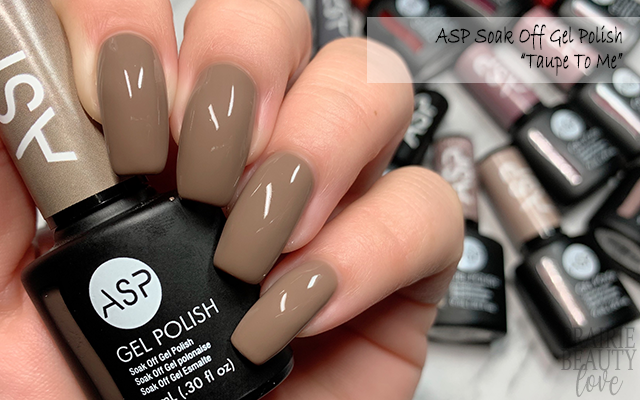 ASP Soak Off Gel Polish in Taupe To Me*
This is a really lovely sort of cashmere taupe shade, a perfect balance of grey and brown with really, really neutral undertones. This is another shade that I personally just love and that I think is really modern and easy to wear. I've officially gotten to the broken record point in this review, but this one performs just like the other créme polishes in this range - beautiful smooth and easy application with full coverage in two coats. 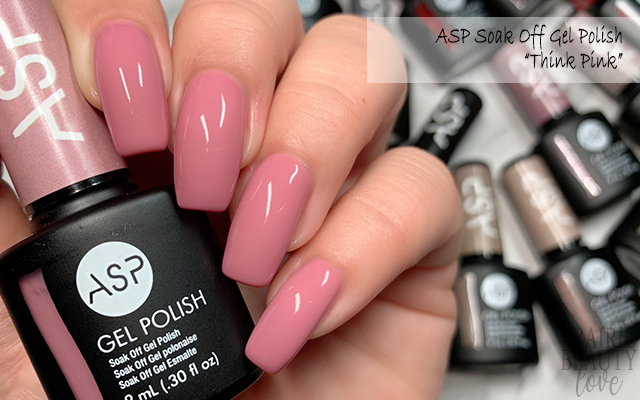 ASP Soak Off Gel Polish in Think Pink*
This is actually the first gel polish I ever purchased, if you can believe it, and it's one that I've actually used in mani's on most of the people whose nails I do in real life (which, let me be clear, isn't actually very many because I am a nail enthusiast, not a nail tech.) It's a really classic pink shade, muted and a little bit ashy and the sort of pink that a woman wears rather than that a girl wears. I don't wear a lot of pink personally, but if I'm going to wear pink it'll be one like this. AND it's a créme formula so it, of course, applies beautifully and evenly and gives full coverage in two coats. 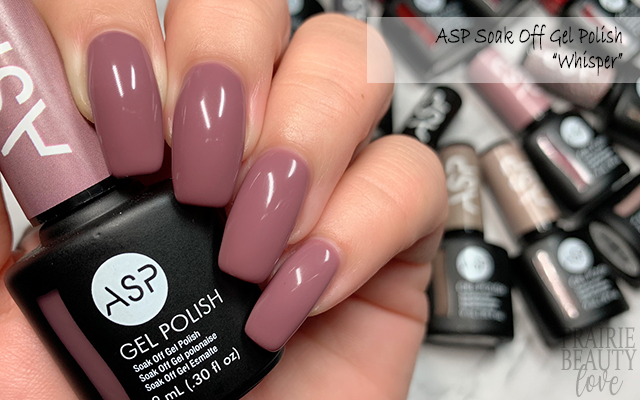 ASP Soak Off Gel Polish in Whisper*
Once upon a time, before I got into nail art, this was basically the only kind of polish shade I wore. Whisper is a warm midtoned mauve with some ashiness to it and I completely love it. I also think this is another shade that has the right balance to be really, really widely flattering on a lot of different skin tones. This is genuinely a beautiful shade and I highly, highly recommend. And, of course, since it's a créme, we know by now that it applies like a dreamy dream and gives full opacity in two coats. 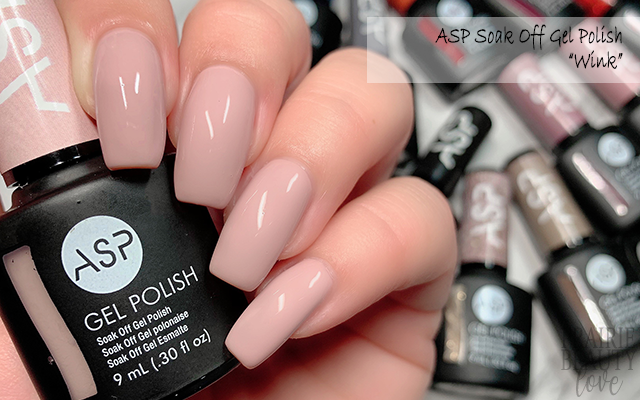 ASP Soak Off Gel Polish in Wink*
This is such a beautiful shade, I swear. I would describe this as a very pale, neutral pink shade (which is very much a nude on my skin tone. I have to say that while I loved the finished look of this in the lacquer formula, I did find it a little bit tricky to work with, so I was thrilled at how easy and perfect it was to apply this in the gel formula. I suspect it's because these light shades have so much white in them, which can lead to tricky formulas in regular polish but isn't so much a problem in gel. I love this one, beautiful application and two coat coverage - although you might need three if you have a really strong visible nail line in this one just because it's so light. 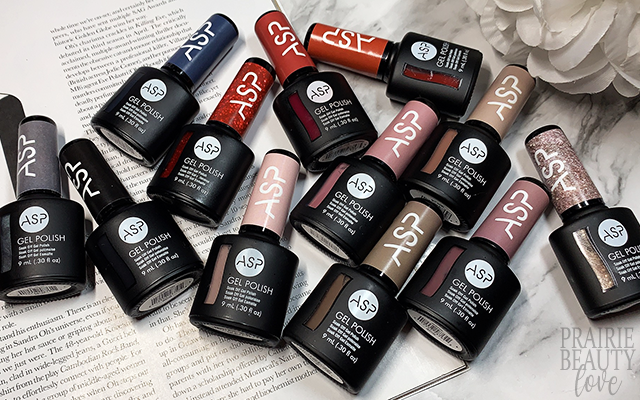 Honestly, I can't say enough good things about the ASP Gel Polish formula and I really think they're an incredible option for people who want to do their own gel mani's at home - which might be what you're in need of at the moment with salons closed so many places. They're just so easy to work with and give such a beautiful, stunning mani.
If you're new to gel polish, ASP even has a couple of different starter kits that contain the LED lamp as well as base and top coats. This is the brand that I learned how to do gel polish using (long before they ever sent me these polishes to swatch) and I really do think it's a beautiful and incredibly easy brand to work with, even for absolute beginners.
ASP Soak Off Gel Polish* is available at Sally Beauty in store and online!
Thanks for reading! 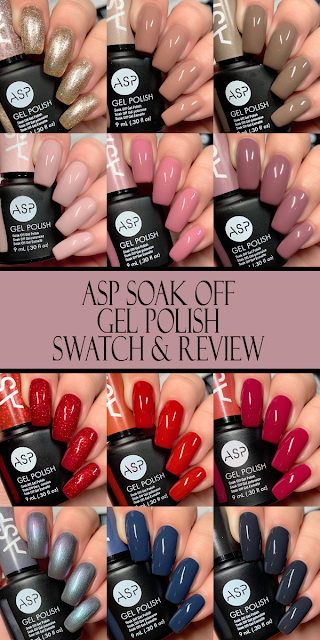